Local College with a Big Impact for Tucker 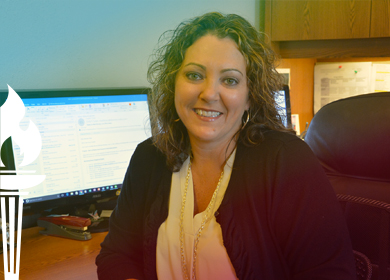 Sept. 1, 2017 - Life doesn’t always go as planned. Emily Tucker’s life certainly didn’t take the route she imagined when she was a young girl in high school, but she can say this with a big smile and a grateful heart, thanks to a loving husband, a special son, many good friends and a hometown college.

Autism holds special meaning for Tucker, as she and her husband, Michael, have an autistic son, who also suffers type 1 diabetes.

The Richmond County native understands small business and the needs of her community. As Chamber president, Tucker has launched a variety of new programs and development initiatives and has worked hard to establish the Chamber's relationships with officials at all levels of government.

Tucker often tells others what a treasure RichmondCC is for Richmond County and the major role it played in getting her where she is today in her career.

“I could not have gotten my degree at UNCP without RichmondCC, and I would not be the president of the Richmond County Chamber today had it not been for RichmondCC,” she said.

Tucker suffered an injury in high school that sidelined her first career choice, so she had to come up with a “Plan B” right out of high school.

“I was newly married, and I wanted to attend school close to home but one that would give me the same opportunities as a big campus college,” Tucker said. “RichmondCC allowed me to attend college full-time while also working a full-time job. It was affordable and offered flexible scheduling. It provided me many conveniences that a non-traditional student like myself needed.”

Tucker graduated from RichmondCC with an associate degree in Business Administration in 2000, but before graduating, she started working as a receptionist at the Richmond County Chamber of Commerce. RichmondCC made it convenient for Tucker to pursue her bachelor’s degree from UNCP and continue to work. In 2001, she had her son, Scott, and she took a semester off. However, she wasn’t planning on slowing down.

“The transition between RichmondCC and UNCP was beyond convenient. After receiving my associate degree, I was able to enter UNCP as a junior. Most of my classes were offered at night on RichmondCC campus, which allowed me to work during the day,” Tucker said. “The biggest inspiration for continuing my education were the friends I made along the way. We kept each other going when the going got tough. While not all were married with children at this time, we all had full-time jobs.

“My husband Michael was and still is my biggest cheerleader. During my college years, he also worked full-time, but he became ‘Mr. Mom’ so I could finish my education,” Tucker added.

Tucker also built meaningful and lasting relationships while at RichmondCC.

“I had several great instructors at RichmondCC,” Tucker said. “Devon Hall, whom I now consider a great friend, was one of the first to have an impact on me. I was working at the Chamber while taking some of Mr. Hall’s classes, and I often laugh about a class trip he took us on to Washington, D.C. I am a visual learner, so I had to see the U.S. Chamber of Commerce, which meant all of us trooping through two feet of snow to this landmark.”

Tucker also made a lifelong friend when she began pursuing her bachelor’s degree at UNCP.

“Julie Layne was the UNCP representative at RichmondCC during this time, and she was a tremendous asset to me while choosing classes for UNCP. Julie made sure I took what I needed when I needed it so I could graduate on time,” she said.

Tucker also said she owes her education and career choices to her predecessor at the Chamber of Commerce, Bennett Deane.

“Without his encouragement to pursue my education, I would not have been in the position to apply for the president’s position when Bennett resigned,” Tucker said. “The Chamber allowed me the opportunity to attend college while working full-time, and the convenience of Richmond Community College being right down the road made that possible.”

As a young wife and mother while going to college, Tucker said she made a lot of sacrifices. Balancing life and school was not easy, but RichmondCC was the fulcrum that made it all work for her.

“As president of the Richmond County Chamber of Commerce, my proudest conversations are when I am able to share with students and prospective newcomers to our community about the wonderful college we have right here at home,” Tucker said.

There’s still time to get enrolled in classes this fall. The College has later starting classes that begin Sept. 14, Oct. 17 and Nov. 15. Call Student Services at (910) 410-1730 or visit the main campus in Hamlet or the Honeycutt Center in Laurinburg. Check out the full Fall Class Schedule.