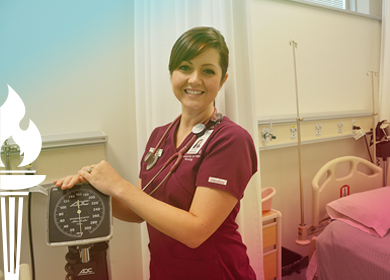 RCC Nursing Student Pursuing Her Dream of Caring for Others

2015 will be a hallmark year for Lauren Burris of Ellerbe.

In May, the young nursing student will walk across the stage at Richmond Community College and officially be “pinned” as a graduate of the Associate Degree Nursing (ADN) program. She’s also in the midst of planning a wedding and has already mapped out a plan to continue her education in nursing.

Burris has shown her drive to become a nurse since first arriving at RCC. Because she did not qualify for financial aid, she worked two jobs to pay for her education. She has since received three scholarships, the Margaret Ussery and Robert Franklin Pence Jr. Memorial Scholarship, the Annie Brooks Beam Memorial Scholarship and the Florence L. Hunter Scholarship, that have helped offset the cost of college.

“My confidence faltered a little when I began the nursing program. It is a whole new world in this field of study,” said Burris, who was elected president of the ADN Club. “However, thanks to the wonderful faculty and the RCC family I have here, I look forward to going to class and being part of this environment.”

From Banking to Medicine

Burris was working full time at a credit union and making good money when she decided to pursue her dream of becoming a nurse.

“I’ve always been fascinated by medicine and caring for others,” Burris said. “There are many careers where you take care of others, but in nursing you are treating the whole person.”

“The instructors at RCC are so helpful. They actually care about whether or not we are successful,” Burris said. “It’s so nice to have faculty as a support system. They make you feel passionate about what you are learning.”

Students get to experience first-hand what it’s like to be a nurse by doing clinical rounds at local medical facilities. This exposes them to the many areas of healthcare, while also giving them the opportunity to perform well for future employers.

“My passion is cardiac. I also love pediatrics and geriatrics,” said Burris, who is currently working as a certified nursing assistant at First Health Richmond Memorial Hospital. “However, I will be thankful for any nursing position I am offered once I graduate, because I cannot imagine a better career for me — or a more rewarding one — than nursing.”

Once she graduates from RCC, Burris plans to begin working right away on a bachelor of nursing degree through a distance learning program with Winston-Salem State University.

“Eventually, I would like a master’s degree and possibly a nurse practitioner degree. My goal is to see a Duke University degree hanging on my wall,” Burris said. “I want to have an advanced nursing degree to better serve my community. Health promotion and maintenance are huge concepts in nursing, and being in the ADN program at RCC has taught me there is a dire need for community education about these two concepts.”

RCC nursing faculty describes Burris as an exceptional student with “leadership potential, tenacity and compassion for her clients. She holds herself accountable for meeting the high standards of the nursing profession.”

Preparing for a New Life

With one semester left to go at RCC, Burris is ready to enter this new chapter of her life. Not only is her career about to take off, but also she and her fiancé, Joel McDonald, are planning to marry next November. The couple has an energetic 18-month-old black lab named Coal, who Burris describes as her “firstborn.”

“RCC has made my goals in life attainable. My instructors have set a standard for me that I never thought would be possible,” Burris said. “Going into nursing school is the one thing I have done solely for myself, and I am happy to know RCC laid the foundation for this chapter in my life.”