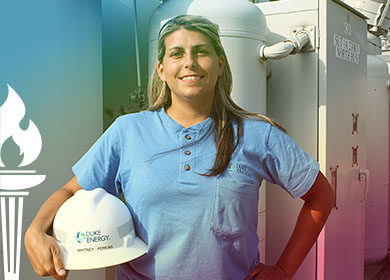 When Whitney Perkins walked across the stage at Richmond Community College (RCC) on May 11 to accept her college degree, her father cried. She would have cried too, but she didn’t want to ruin her makeup, a rare adornment for a fresh-faced tomboy like Whitney.

Whitney was among the six students in the first class to complete the rigorous Electric Utility Substation and Relay Technology program at RCC. Of those six, she was the only female in her class and also one of the top performers in the program. In less than two weeks, she would begin working as a relay technician for Duke Energy, the largest electric power holding company in the United States.

On May 11 when Whitney shook hands with RCC President Dr. Dale McInnis and received her associate degree, she basked in the moment that she’d worked so hard for over the past eight years, the moment when she proved to herself and her family that she could achieve her goals – despite a backward approach to life’s plan.

“I exited high school like a lot of girls my age,” 25-year-old Whitney said. Just before her 17th birthday, she got pregnant. She dropped out of school at Richmond Senior High in Rockingham and endured her father’s bitter disappointment. Like most parents, Kermit Perkins had big plans for his daughter. He wanted her to finish high school, go to college, get a job, build a career and then plan a family.

“I realized I had brought this on myself, and I was going to take responsibility for what I’d done. I was going to be the best mama that I could be,” Whitney said.

After having her son, Dalton, she went to RCC and completed her GED quickly because she scored so high in all her placement tests. She took a job in a textile mill working third shift, but working nights and starting a family proved difficult. She found a first-shift job at another textile mill but was laid off. After a series of mill jobs and a brief stint pursuing a spot in RCC’s competitive nursing program, Whitney found first shift work at a salvage yard, but it went out of business.

“I knew I could find a job making minimum wage, but I wanted more than just a job. I wanted a career – not a job that I had to wonder if it would be there in a few months,” Whitney said. “I also wanted something that would allow me to do better for my children and my fiancé.”

Whitney has never been “traditional.” She likes working on cars and four-wheelers, getting her hands dirty tearing apart motors and putting them back together. She believes in equality in marriage: both parents contributing financially to the family and taking care of the household.

She has always gravitated toward male-oriented jobs. When she sat down with RCC counselor Tim Harris in 2011 to explore programs that aligned with her interests and skill set, it was no surprise that she was directed toward the Electric Utility Substation and Relay Technology (EUSRT) program, a new program of study being offered by RCC that fall that would prepare students for employment in the electric utility industry and other industries that rely on complex control systems.

Established in partnership between RCC and Duke Energy, the EUSRT program at RCC is the first of its kind in the state of North Carolina and only offered at a handful of colleges nationwide.

“This is exactly the opportunity we want our students to have,” McInnis said.  “Thanks to the partnership with Duke Energy, RCC has created a program that meets workforce needs and positions our graduates for life-changing careers.”

“I knew Whitney was going to be a good student when I gave a difficult extra credit assignment dealing with transformer calculations and she spent four hours on the Internet completing the task. She got most of it correct,” said Steve Lampley, EUSRT lead instructor and a former Duke Energy senior engineering technical support specialist.

“Mr. Lampley pushed me hard,” Whitney said. “But I was determined to have this career. I worked hard to earn the best grades that I could and learn as much as I could. I tried to pick as much as I could from Mr. Lampley’s brain about protective relaying.”

Whitney interned during the summer of 2012 at Duke Energy after her first semester. She went into it with the same gritty determination to give 200 percent as she had done in her classes.

“I wanted them (Duke Energy) to see my full potential. I wanted them to know that this is what I want to do, this is the type of work I’m interested in.”

Just a few weeks into the internship, however, she broke her kneecap in an accident at home. She begged her supervisor not to put her at a desk job and to leave her out in the field. He agreed to, and Whitney went to work everyday wearing a full leg brace, climbing ladders and replacing grounds.

“When people tell you that you can’t do something, let that motivate you, to strive harder, to prove them wrong,” Whitney said. “I have had plenty of people put me down and tell me I can’t. That’s when I tell them, ‘See where I am in two months, in two years, in 10 years.’”

When the summer internship ended, Whitney felt confident about her job prospects after graduating. But she still had a year of college to complete. When her motivation slackened, her fiancé Brandon was always pushing her to keep going.

Whitney also had the support of the RCC president, McInnis.

“There’s not many colleges where you can walk by the president and he calls you by your first name and ask you how you’re doing,” Whitney said. “The people here at Richmond Community College, the instructors and administrators, they get behind you from the beginning and give you what you need to succeed.”

Going to a Job That’s “Not Work”

Whitney’s alarm goes off at 4:30 a.m. every weekday. She starts a pot of coffee and prepares for a long day driving around the nearly 15-county service area she covers for Duke Energy. Living in Wallace, S.C., she can have more than an hour’s drive home when she knocks off at 5:30 p.m. Even when she’s off, however, she has a company phone that could ring at anytime calling her back into work.

“My daddy always told me it’s never work if you love your job,” Whitney said. “I bounce right out of bed when that alarm goes off.”

Salaries in the electric utility industry start at anywhere from $50,000 to $60,000. As technicians advance in knowledge over the years in the industry, they advance in salary.

Whitney admits she is making more money than she ever imagined possible, but it has never been about money.

“This is a career. This is something I’ll be doing for the rest of my life,” Whitney said. “I have two little boys, and now I know I can help provide for them each and every day.”

“Disappointment is an ugly word,” Whitney said. “When I got pregnant, my daddy told me I had let him down. It hurt. He was my best friend, and we didn’t talk for a while.”

On the day Whitney graduated from RCC, her father saw the life plan being completed that he had dreamed about for his daughter.

“He told me he was proud of me,” Whitney said. “I had waited so long to hear that again. Without the support of my family – and my friends – I couldn’t have made it this far and achieved what I’ve always wanted to achieve: a career.”