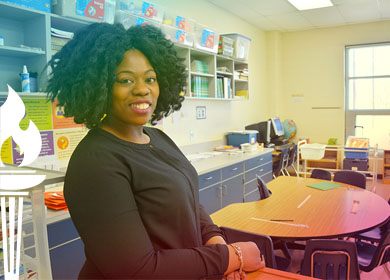 Fadra McMillan sits in a little white rocking chair called the “Share Chair” with a dozen expectant faces looking up at her. The first-grade teacher at Devonshire Elementary School in Charlotte knows this is a critical time in these young students’ education to create a foundation for success.

As a child that grew up in Public Housing and a single parent home, McMillan knew that her success in life would be contingent upon hard work, dedication and building positive relationships with others.

“Education was my way out, and Richmond Community College helped put me on the right track to get where I am today,” said McMillan, who was named the 2014 Teacher of the Year at R.B. Dean Elementary School in Maxton.

McMillan, a native of Hamlet, started college at RCC right after graduating from Richmond Senior High School in 2006. While a Rotary Club scholarship helped offset tuition costs, she worked at a daycare center while going to school. She had very little time for “hanging out,” which is what most of her friends were doing at that age, but she focused on her plan to become a teacher and be able to give back to her community.

A student in RCC’s Early Childhood Education program, McMillan made RCC’s honor lists each semester and was an active member of the Student Government Association.

“Mrs. April Chavis-Johnson and Ms. Eleanor McRae, who was the department chair at the time, were instrumental in letting me know that I could transfer into the North Carolina university system and use the credits I earned at RCC toward a bachelor’s degree,” McMillan said.

After earning her bachelor’s degree, McMillan worked as the assistant director of a childcare facility and then as a lead teacher at a local Head Start. In 2011, she decided to transition into the public school system. She became a first-grade teacher at R.B Dean Elementary, where her dedication to instill in her students a love for learning was recognized.

Now McMillan is starting mid-year at a new school in a new classroom with new students, but her goal remains the same: to be the best teacher she can be.

“I came from an impoverished neighborhood. I had the support of my family and the desire to work hard, but I also had many mentors along the way,” McMillan said. “At RCC, I found a personalized learning environment where my teachers and advisors knew me and the challenges I faced. It was at RCC where I realized my purpose in life and began to dedicate myself to the mission of impacting, empowering, and inspiring every child I taught.

“It is my hope to positively influence students to see that their ability to succeed is not a direct correlation of the environment in which they live, but instead the tenacity to overcome barriers and unfortunate circumstances, thus making them productive members of society properly equipped with the tools to become a statistic of success and not failure,” McMillan said.