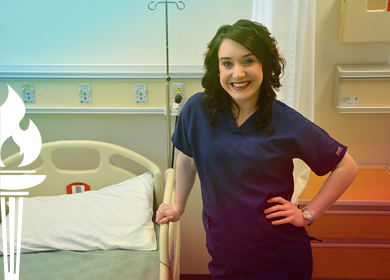 From Adult High School to College, Former Drop-Out on Path to Becoming a Nurse

Hogan is familiar with rock bottom, because that is where she found herself when she dropped out of high school in the 10th grade.

“I was a wayward child, to say the least,” said the Mississippi native who moved to Rockingham without her parents when she was 15.

Hogan started putting her life back together about a year later when she realized if she was to have any future, she needed a high school diploma. She checked out the Adult Secondary Education programs offered by RCC’s College and Career Readiness division and liked the format of the Adult High School program.

In the Adult High School program, students earn a diploma by completing courses in English, math, social studies, science and electives. Online classes are available if transportation, childcare or health issues prevent individuals from coming to class. All classes are offered tuition free.

“The best thing for me about the program were the hours classes were offered and that you could work at your own pace,” Hogan said. “I work at a very fast pace — a ruthless pace, and I took as many classes as they would let me. I literally would be working on my school work from 8 in the morning until 10:00 or 11:00 at night.”

Hogan also liked the intimate learning environment of the Adult High School program, where she had instructors who were always available to answer questions every time she had one — and Hogan is a steady stream of questions! Two of her favorite instructors in the program were Pridie Ariail and Phillip Covington.

“Phillip Covington was an amazing instructor,” she said about the former RCC instructor who recently died after a battle with cancer. “I was so saddened when I heard of his passing.”

Hogan said at times she would have to miss class, but the flexible, self-paced format of the program allowed her to pick back up where she had left off, and her instructors always welcomed her back.

Because of her diligence, Hogan finished the equivalent of three years of school in two years. She graduated with her high school diploma in December 2013.

Once she had that under her belt, she knew her next step was college so she enrolled at RCC, taking general education classes until she figured out what her career path was going to be. She also joined the Student Government Association and served as secretary.

“After my first semester at RCC, I knew I wanted to become a nurse because it was a career that would give me a sense of purpose. As a nurse, I will be helping people and that drives me,” Hogan said.

Hogan plans to earn a Bachelor of Science in Nursing (BSN) from a four-year university. She is enrolled in RCC’s Associate in Science degree program, which will give her the prerequisite classes and credits she needs to transfer.

Hogan continues to be ruthlessly focused on her education. She enrolled in the phlebotomy course and is currently taking the Nursing Assistant I class. She is making sure all the classes she takes at RCC are on her BSN transfer checklist.

“If you see me on campus, you will rarely find me in a bad mood or complaining about my school work,” Hogan said. “Once I realized that I was in complete control of where my life was going, everything clicked for me, and I knew I could do whatever I wanted to do if I just worked for it.”

RCC proved to be positive educational environment that Hogan was looking for.

“What I really like about RCC are the instructors. They don’t expect you to make straight As, but they do expect you to work hard and show up for class. I am not a straight-A student, but my work ethic overcompensates for that and is respected by my teachers at RCC.”