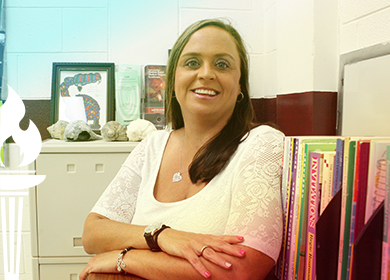 One of the most important things Lisa Leviner tells her two sons, ages 12 and 14, is don’t wait to go to college. “Don’t wait until you’re 30 something years old to go to college,” she says to them. “Get your education while you’re still young and don’t have as much on your plate.”

Leviner, of Rockingham, has spent the past three years feeling like her plate is overflowing. She has been attending classes at Richmond Community College, juggling the active lives of two growing boys and spending countless hours by the hospital bed of her ailing husband. Despite these many obstacles, Leviner is only two classes and an internship away from having an Associate Degree in Early Childhood Education from RCC.

She is also about to begin a rewarding career in childcare that she has talked about having ever since she herself was a child.

A Heart for Children

“My daddy recently reminded me that I told him from the time I was 9 years old that I wanted to work with children. I told him some day I would even run my own daycare,” Leviner said. “I’ve always had a heart for children.”

Leviner studied childcare while in high school. After high school, she worked for several daycare centers and even attended classes needed to work in childcare.

“I like reaching out to children and showing them love and attention,” Leviner said. “In daycare, you’re reaching them at a very early age. You’re teaching them things they’re going to remember for the rest of their lives.”

After she and her husband moved several times around the state, she deviated from her career plan by taking a job at a local chicken processing plant. It was not a good fit for someone who wanted to be touching children’s lives. Leviner soon found herself without a job.

“That’s when I decided I was going to enroll in college. I thought this would be the perfect time for me to get my education,” Leviner said.

Her first few semesters went well and she made the college honors list, but then her husband became ill. Every three months, he was spending at a week to two weeks in the hospital.

Suddenly, going to class and studying became more of a battle for Leviner as she shuttled her boys to baseball practice and other activities while also going to the hospital to be with her husband.

“Some nights I would be at the hospital until 1 a.m.,” Leviner said. “There was a big table in my husband’s room, and I’d spread all my books out on it and my laptop and study there. The nurses would say to me, ‘You must really want this degree.’”

The Early Childhood Education curriculum at RCC prepares students to work with children from birth through 8 years old in diverse learning environments. They learn about child growth and development; physical and nutritional needs of children; care and guidance of children; and communication skills with families and children.

Despite all the struggles she has faced, Leviner will graduate from the Early Childhood Education program in December. She is thankful for the encouragement she received from her advisors and instructors at RCC to keep going and not give up on her college education.

“My instructor, April Johnson, who advised me to enroll in the program and get a degree, told me, ‘After all you’ve been through, you’re finally going to reach that mountain top,’” Leviner said.

Leviner is the first in her family to get a college degree, but she certainly doesn’t want to be last, which is why she regularly encourages her two sons to go to college after they finish high school and before too many of life’s obstacles get in their way of their educational and career plans.

“It’s been a battle for me. It seems the harder you try the more obstacles are going to get thrown in your way, so just have to try harder,” Leviner said. “I’m proof that if you’re determined, you can go to college.”