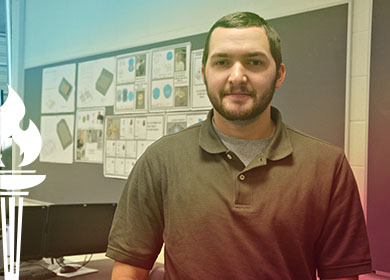 Aaron Wiggins of Rockingham had a college degree by the age of 19 thanks to the Early College program at Richmond Community College. Now a 22-year-old, Wiggins has returned to RCC as an instructor and is seeing people his age only just beginning their college education.

“The Early College program was a huge opportunity for me, and I definitely benefited from it,” said Wiggins, who began teaching at RCC this fall in the Mechanical Engineering program. “If I hadn’t gotten into it, I probably would still be in college, or like many others my age, just getting started.”

Getting An Early Start

Wiggins admits it was somewhat intimidating at first being a ninth-grader on a college campus, but he said Early College students quickly become a tight-knit group of friends who are together for five years.

Wiggins was among the first graduating class of Early College students in 2012. He completed an associate degree in Mechanical Engineering.

“One big advantage of the Early College program is that all your college classes are free,” Wiggins said. “Unlike a lot of people my age, I don’t have any college loans or college debt to pay off.”

While many of his classmates transferred to four-year universities after attaining their associate degrees, Wiggins went to work using his applied technology degree. He spent several months at Cascades Moulded Pulp in Rockingham before taking a job as a production designer for FerroFab in Hamlet.

Returning to the Classroom

Wiggins soon found himself back at RCC, but not as a student. He began teaching customized training courses offered through the College to local companies at night. Before long, he was teaching regular curriculum courses part time.

When a full-time teaching position became available in the Mechanical Engineering Department, Wiggins applied for it and was hired. He began teaching full time this fall semester.

“I like teaching because I can share my knowledge with others who are interested in learning about the same things I am interested in, and I get to help them better themselves,” Wiggins said. “I’ve always liked building things, taking things apart and seeing how things work, so the Mechanical Engineering program was a good fit for me as a student and now as an instructor.”