Nov. 7, 2017 – Brett Deaton and his family traveled from their home in Holly Springs, Ga., to Richmond Community College’s Convocation so Deaton could return to his alma mater and accept the 2017 RichmondCC Outstanding Alumni Award. 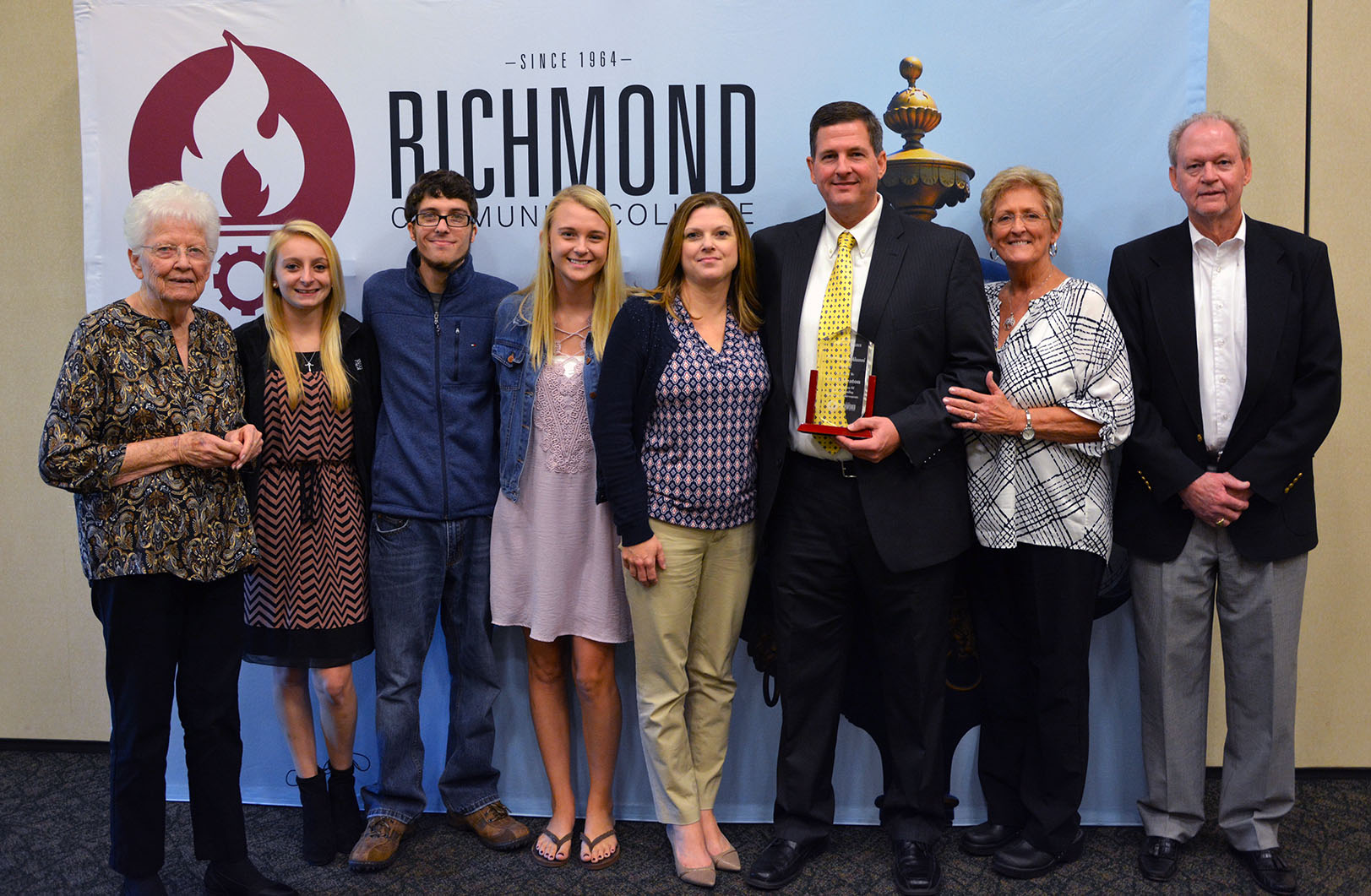 “I’m very humbled and honored to have been chosen for this award. It’s been 23 years since I was a student here,” Deaton said at the College’s Convocation ceremony on Oct. 25. “My name may be on this plaque, but there are many people whose names should also be on this plaque.”

Deaton recognized his grandmother, Margaret Byrd; his parents, John and Patty Deaton; and his wife, Becky, for the supportive role they played in helping him get his education. Deaton also recognized his former employer while in college, Bill McQuage, who always worked around his class schedule.

Deaton graduated from RichmondCC in 1994 with an associate degree in Business Administration. He received a bachelor’s degree in Business Management in 1996 from the University of North Carolina at Pembroke and a Masters in Supply Chain Management from Penn State University in 2010.  In addition, Deaton earned two professional certifications, Certified in Production and Inventory Management and Certified Supply Chain Professional, from the American Production and Inventory Control Society.

Deaton is the Director of Supply Chain for Toyo Tire North America, located outside of Atlanta, Ga. He was on a business trip in Japan for the company when he first learned he had won the Outstanding Alumni Award.

“I hope I’ve set a good example for my children, Lauren and Matthew, when it comes to education,” Deaton said.

Deaton, who grew up in Laurel Hill, graduated from Scotland High School in 1990, but he was not ready to attend a university. Richmond Community College was close to home and an easy commute, so he enrolled and began the foundation for his education and career goals.

“After two years, I had a degree, and it made me realize that if I set a goal, I can achieve it,” Deaton said. “After RCC, I set another two-year goal of earning my bachelor’s degree.”

Deaton worked 30-plus hours while he was at RichmondCC, so he did not have much time for anything beyond his job, school, and starting a family.

The small classes and individualized attention he received while at RichmondCC helped motivate him and keep him on track.

“Both Alan Questell and Dr. Devon Hall made the classroom enjoyable and made me look forward to attending their classes,” Deaton said. “Dr. Hall and I have remained in contact since I graduated, and he has graciously supported me by being a job reference and writing letters of recommendations to further my education.”

It is for this very reason that Deaton would recommend others make RichmondCC their first-choice college. Taking the community college route to get to the university, he said, you get one-on-one attention in smaller classes, and you are earning a transferable degree in your first two years of college and not just college credits.