April 5, 2021 - Jason Blevins is a long way from his hometown of Loudon, Tennessee, but the 19-year-old is right at home in the Electric Lineman program at Richmond Community College. 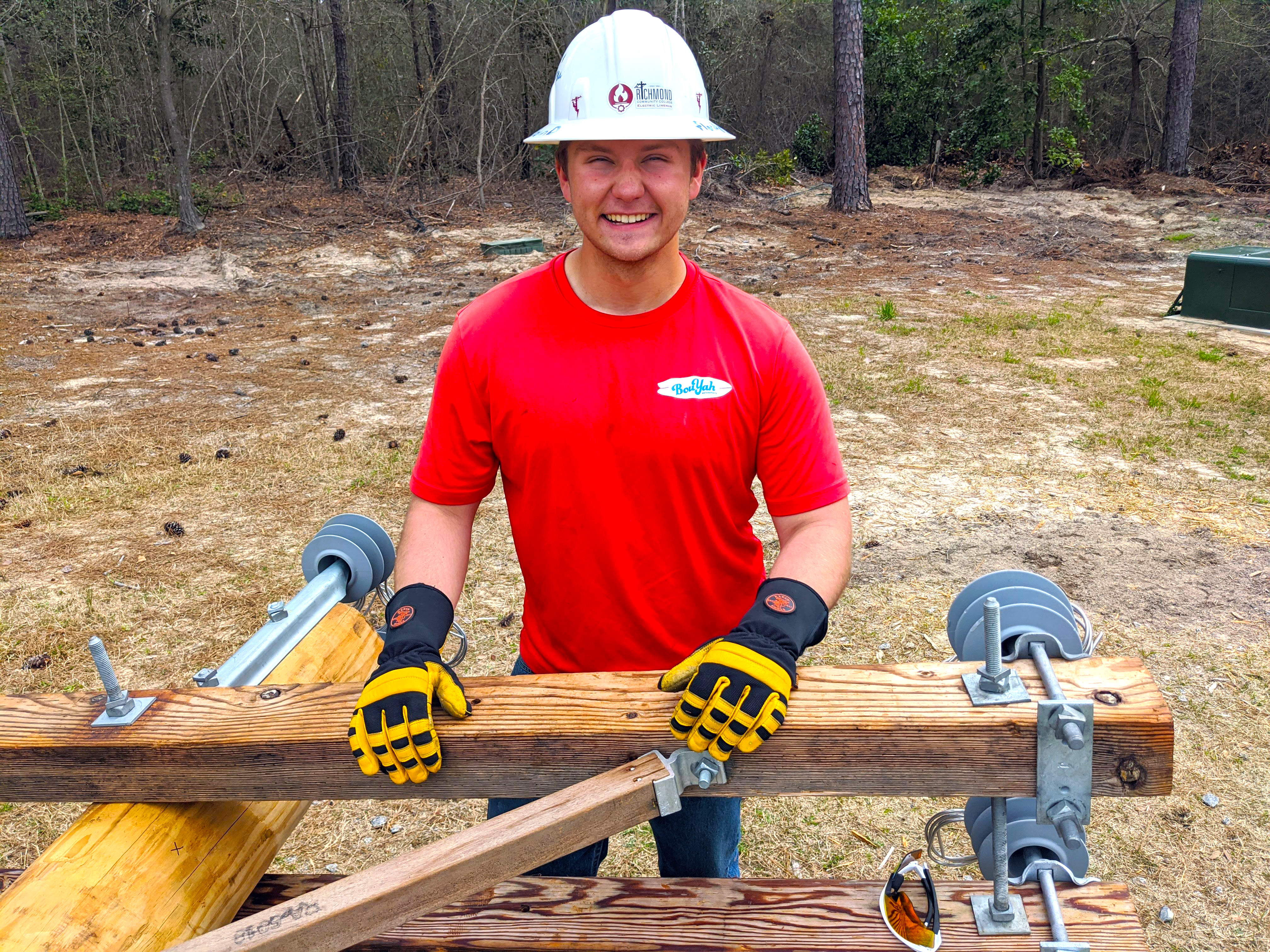 Blevins heard about the lineman program at RichmondCC through his grandfather, who lives in Rockingham. Blevins had been looking at different lineman schools and had asked his grandfather to co-sign on a student loan to help pay for his training. He was prepared to pay $15,000 to $20,000 for his education, but once he heard about the special deal being offered for the lineman program at RichmondCC, he took a leap of faith and relocated to Richmond County.

The Electric Lineman program is currently being offered for a special discounted price of $499, which includes course fees and equipment. The 15-week program normally costs $1,390, but federal GEER funding for an initiative called "New Skills, New Life" has allowed RichmondCC to drastically reduce the price for students.

After only 8 weeks in the program, Blevins feels he has more training under his belt than his friend who enrolled in the high-dollar lineman program that he had been considering.

One of the things Blevins likes about the program at RichmondCC is the small class size.

"There's 200 to 300 people in the program at the other school. Here, there's only 20 to 25, so it's a lot of one-on-one. You're able to ask questions and get the full amount of knowledge and attention from your instructors," he said.

Plus, being such a small group, Blevins has made many new friends among his classmates.

Blevins chose to become a lineman because he wanted to continue a family legacy of working with electricity. His late father was an electrician who worked as a project manager in Mississippi helping to build oil rigs. The first time Blevins climbed the 40-foot electric pole in the Lineman Yard he got a rush out of being up so high and seeing the world from that vantage point.

"It really came naturally to me," he said. "I thought it's kind of cool being up here working and getting paid for it -- eventually."

Eventually is not so far off for Blevins. Upon the recommendation of Electric Lineman Program Coordinator Scott Caulder, Blevins has already been recruited to work for Volt, a national electric utility service provider. He will be starting May 10, just four days after he will graduate from the lineman program.

“Volt has always reached out to RichmondCC every time they need a new hire,” Caulder said. “They are very satisfied with our curriculum and training in the lineman program.”

Blevins is excited to get started. Working for Volt, he could be sent as far west as Texas or as far north as Illinois, and definitely all over the Southeast. As a young, single guy with no ties to any particular place, Blevins is ready to travel and see the world. His career goal is to become a foreman or a superintendent overseeing crews.

“Jason is a very intelligent young man, full of heart and teamwork. He is also a fast learner, always the first one to volunteer for a performance task in the field,” Caulder said. “I am proud to be his instructor.”

The lineman class starting in May is already full, but spots are still available for the class starting in September. To sign up, call Programming Assistant Alicia Butler at (910) 410-1706 or email ambutler979@richmondcc.edu. To learn more about the Electric Lineman program at RichmondCC, visit www.richmondcc.edu/lineman.