May 23, 2019 – N.C. Sen. Tom McInnis was the guest speaker at Richmond Community College’s Electric Lineman graduation ceremony on May 17, touting the success of the program and its ability to immediately provide graduates with well-paying jobs. 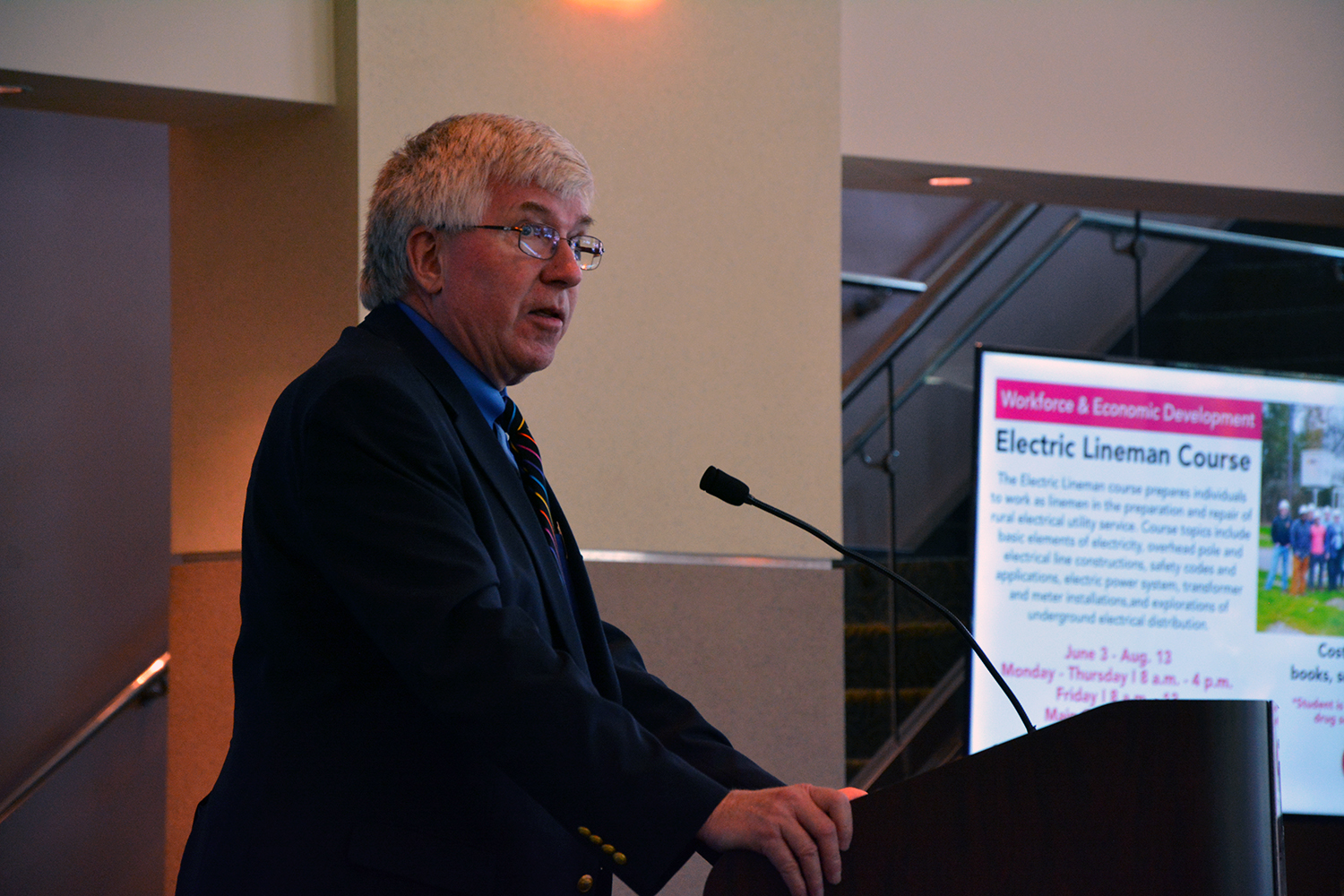 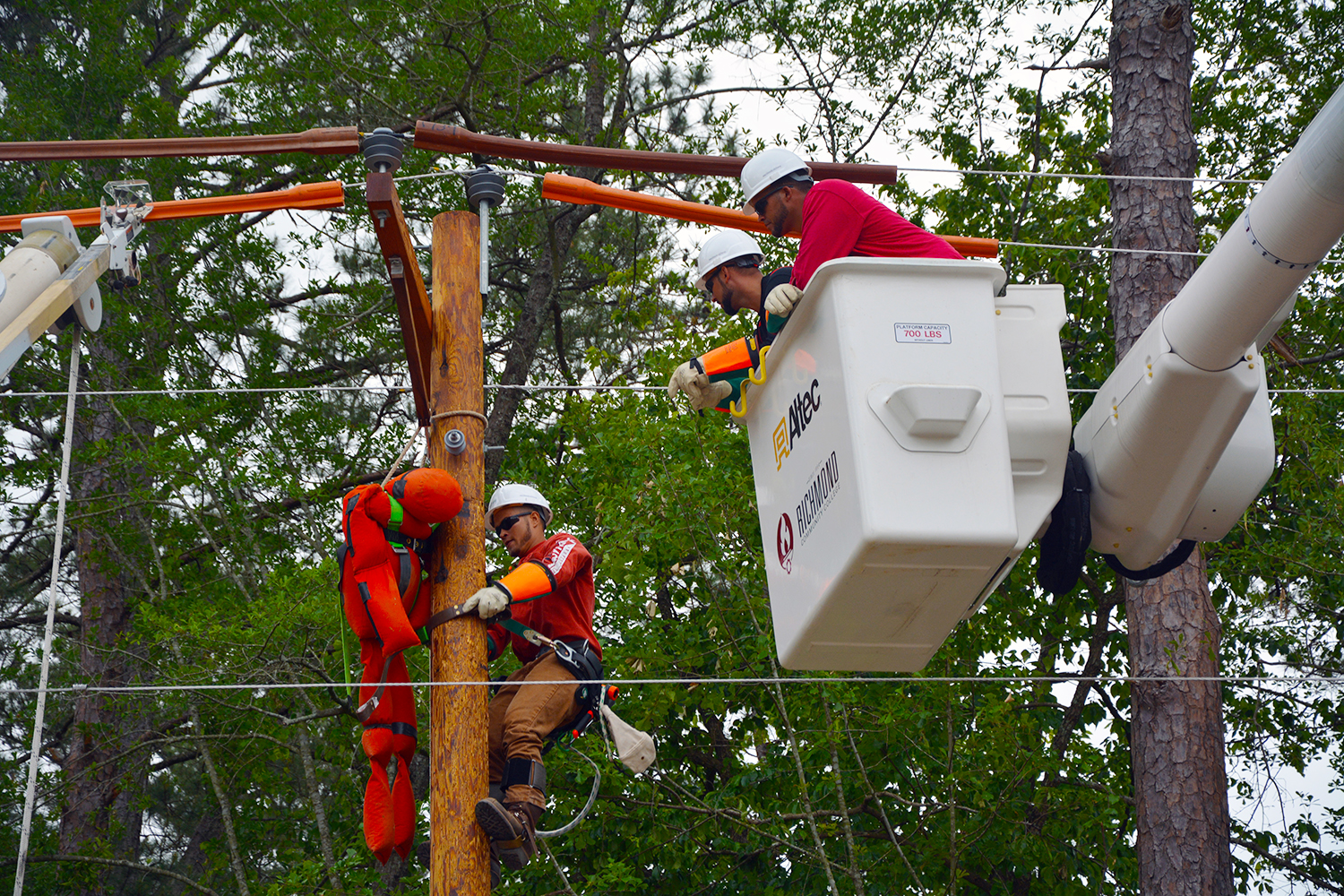 Sen. McInnis was instrumental in getting the program started in the fall of 2018 by securing a $300,000 special allocation from the N.C. General Assembly for short-term workforce training, with one directive: Get something big started quickly.

“And you got it done,” Sen. McInnis said to the RichmondCC leaders and staff present at last week’s graduation ceremony. “You’ve already graduated one class and put them to work. Now you’re graduating a second class who are about to be fought over by the industries present.”

Twenty-two students graduated from the College’s second class of the program with multiple utility companies on hand to offer graduates employment contracts to take home with their certificates of completion.

“This is what it’s all about,” said Sen. McInnis, “when you have your graduates coming off the stage to companies just waiting to hire them.”

Graduates from both of RichmondCC’s first two classes of linemen were all offered a contract of some kind by the end of their respective programs. The College’s third Electric Lineman class will begin June 3 and is already full. A fourth class is scheduled to begin in September and is filling up fast.

Sen. McInnis said the immediate success of the program, which is not yet a year old and has resulted in job offers for all of its 40 graduates, and the fact the course already has a waiting list for students to enroll, deserves additional attention from the state in terms of funding.

“We know we already have premiere higher education in our state with our University of North Carolina system. And we also have a premiere community college system that is second to none,” said Sen. McInnis. “But we need to continue to expand our vocational system to train workers for high-demand jobs that provide livable wages and don’t require a two- or four-year degree.”

Sen. McInnis said initiatives like RichmondCC’s Electric Lineman program that lead to guaranteed jobs after 10 weeks of training are the “deal of the day,” in terms of bang-for-your-bucks education. In addition to earning the Electric Lineman certificate, graduates of the program receive four certifications:

The tuition and fees of RichmondCC’s Electric Lineman class is $675, but may be offset by funding from the Workforce Innovation and Opportunity Act (WIOA), which supported nine of the students, and a 2nd Chance scholarship provided to every student through the RichmondCC Foundation.

“The WIOA assistance made a big impact on my being able to get into the program,” said graduate Carl White of Hamlet, who was working at a local retail company prior to earning his lineman certification and now weighing multiple opportunities for starting a career.

Shane Lill of Rockingham was another graduate who expressed excitement over the program changing his outlook on the future.

“I was working in manufacturing and had concerns about whether that would be a job that would still be around to retire from,” said Lill. “The utility industry is one I feel extremely confident will be around for a long time.”

Sen. McInnis said that change in focus is also necessary at the state level when it comes to funding for educational programs.

“We need to quit being complacent with how things have been done in the past and start working on funding for a new business model, one that is going to lead to guaranteed jobs that pay livable wages,” said Sen. McInnis.

Richmond Community College’s lineman program is a powerful example of this new business model, focused on high-value, high-quality programs that lead to high-demand, high-salary careers provided in less time and at a lower cost to students.