RCC Board Update on Upcoming Events and Startup Program

RCC Board Update on Upcoming Events and Startup Program

The Richmond Community College Board of Trustees was given details about an upcoming Open House and Anniversary Gala, as well as approved Richmond and Scotland County budget requests during its regular meeting held Tuesday at the Honeycutt Center in Laurinburg. 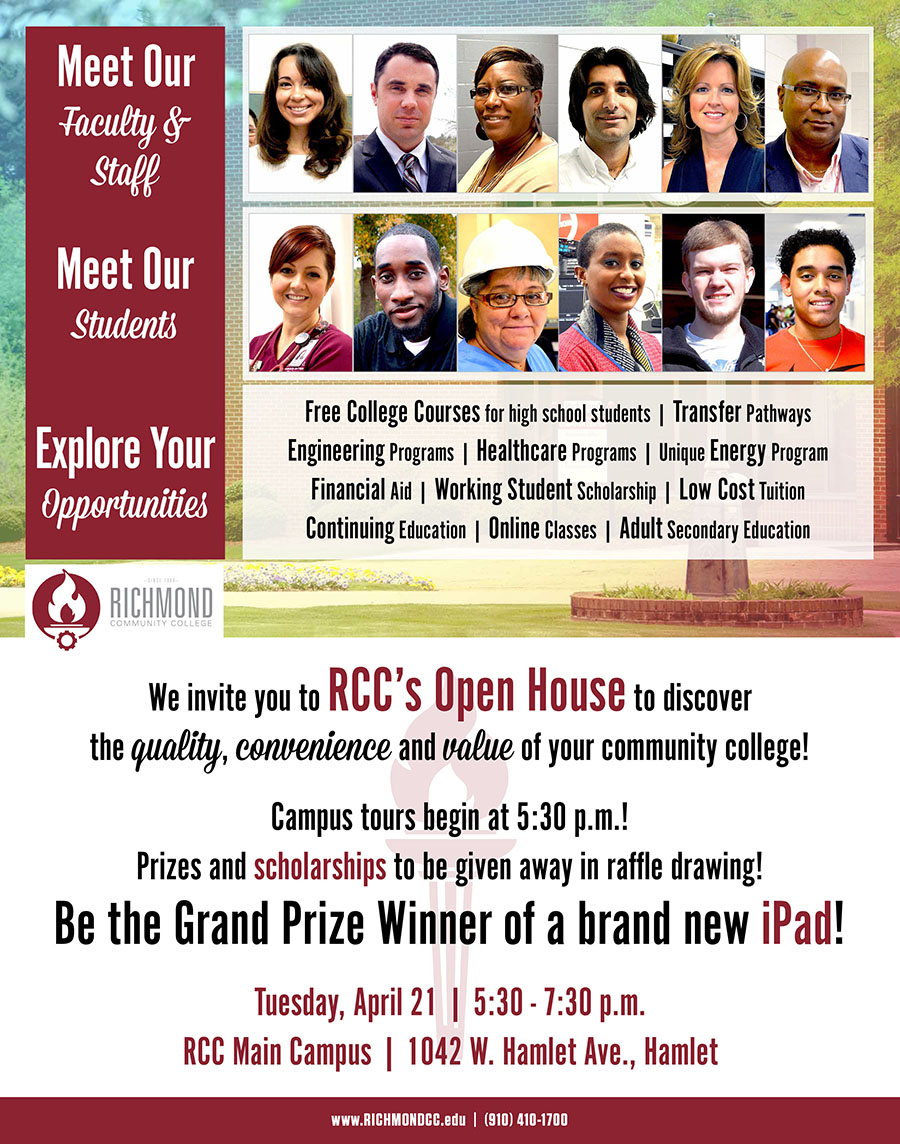 Board members were given details about an Open House scheduled for April 21 on RCC’s main campus in Hamlet where attendees will be registered to win prizes, including an iPad, season tickets to the 2015-16 DeWitt Performing Arts Series and items from the RCC Bookstore, as well as scholarships and vouchers for free classes at Richmond Community College.

“We often have people say they hear we’re doing a lot of good things at the College, but they aren’t exactly sure what good things the College can do for them,” said RCC President Dr. Dale McInnis. “So as our spring semester is winding down and summer and fall semesters are on the horizon, we thought it would be a good opportunity to invite the community onto our main campus to show them exactly what all Richmond Community College has to offer. We pride ourselves in having courses available for anyone looking to improve their quality of life.”

The Open House will be held from 5:30 to 7:30 p.m. and will include guided tours of the facility, as well as information about all RCC has to offer.

Another upcoming event board members received details about was RCC’s Anniversary Gala, which will be held April 25 at the Cole Auditorium.

Entertainment will be provided by The Boomers, a band whose performances have ranged from the '97 Presidential Inaugural Ball to the 2012 NFL Owners Meeting with hundreds of wedding receptions in between. The Boomers members have been featured on national television shows such as “Good Morning America,” “Regis and Kathy Lee” and “The Rosie O' Donald Show,” and they were part of the '97 Academy of Country Music Awards house band.

Corporate sponsorship opportunities are tax-deductible and begin at $1,000, which includes two tickets to the event, as well as recognition on all marketing materials. Individual tickets are being sold for $50. Proceeds from the Anniversary Gala go to RCC’s Working Scholarship, which benefits working students who don’t qualify for federal aid.

For more information or to purchase tickets, contact the RCC Foundation Office at (910) 410-1807 or bowebb@richmondcc.edu.

In other business, board members were given an update on one of RCC’s newest programs, Dialysis Technology, which began in fall 2014.

Lead instructor Robyn Davis informed the board that the first year of the program has been successful and is expected to see growth in its second year.

RCC partnered with DaVita Dialysis Center to implement the program, with students rotating through sites in Rockingham, Hamlet, Southern Pines and Pinehurst two days per week for an average of 16-24 hours of clinical time.

“Each student has a preceptor at each clinical site and performs all the duties of the dialysis technician under his or her preceptor, with the exception of cannulation,” said Davis.

During the 2015-16 school year, partnerships will be added with First Health of the Carolinas in Rockingham and Sandhills Regional Medical Center in Hamlet, as well as DaVita sites in Red Springs and McColl, S.C., being added as clinical options.

“We hope to add more clinical sites to our program over the coming years and to increase enrollment each year,” said Davis.

Plans are to double the program’s enrollment for the 2015-16 academic year.

RCC’s Dialysis Program is a one-year degree program. Students who successfully complete the program are qualified to sit for a certification exam. Starting pay for dialysis technicians in Richmond County is approximately $12 per hour, with the national average for pay being more than $33,000 per year.

Richmond Community College is the only institution in the region to offer a Dialysis Technology program. There are currently 182 job openings for technicians in North Carolina and 106 positions in South Carolina, including 12 jobs listed within RCC’s immediate service area.

Primary employers in the Richmond and Scotland county areas are DaVita and Fresenius, both of which offer excellent benefits packages with insurance for employees.